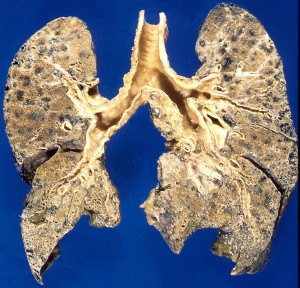 The three top killers in the United States are no longer heart disease, cancer, and stroke. Stroke just moved down to number four. Number three is now COPD, chronic obstructive pulmonary disease, meaning respiratory disorders such as emphysema. We know we can prevent and even help treat the other top killers with diet (see, for example, Heart Disease: There Is a Cure and my 4-min. video Cancer Reversal Through Diet?), but what about COPD?

Though most COPD is caused by tobacco, up to a third of COPD sufferers never smoked. The title of an editorial in this month’s issue of the American Journal of Clinical Nutrition describes where some of the remainder of risk is coming from: “More Evidence for the Importance of Nutritional Factors in Chronic Obstructive Pulmonary Disease.”

As I explore in my 2-min. video Preventing COPD with Diet, data dating back 50 years found that high intake of fruits and vegetables was positively associated with lung function in general, but does that mean it could prevent COPD? There’s been a burst of new research over the last ten years to answer just that question.

In 2002 we learned that every extra serving of fruit we add to our daily diet may reduce our risk of getting and then eventually dying from COPD. In 2006 we could add tea drinking to fruits and vegetables for COPD prevention. In 2007 a twin pair of studies emerged, one from Columbia and another from Harvard, implicating cured meats such as bacon, bologna, ham, hot dogs, sausage, and salami as a risk factor for developing COPD. They thought the nitrite preservatives in the meat might be mimicking the damage incurred by the nitrites from cigarette smoke (see my 2-min. video When Nitrites Go Bad for more). In 2008 Harvard decided to study women as well and came to the same conclusions. We know now what to go out of our way to eat and what to try to avoid.

In 2009 soy was added to the good list; both tofu and soy milk were found to be protective agents against breathlessness. A 2010 article racked up the benefits of fiber, especially from whole grains, but “Impact of Dietary Shift to Higher-Antioxidant Foods in COPD: A Randomized Trial” was the study we’ve all been waiting for. Sure the antioxidant, anti-inflammatory effects of plant foods can help prevent COPD, but what if you already have the disease?

One hundred and twenty COPD patients were randomized into two groups. Half were told to eat at least one extra serving of fruits or vegetables per day, and the other half stayed on their regular diet. The lung function of the control group that wasn’t given any dietary advice slowly, but surely, got worse. That’s what tends to happen in diseases like emphysema–you get worse and worse and then you die. The lung function of the half eating an extra serving of fruits and vegetables every day started out the same, but did not get worse. In fact, if anything, it appeared that their lung function got progressively improved a little over the three years. That’s not supposed to happen; you’re supposed to get worse. View the graph accompanying my video Treating COPD with Diet.

The researchers speculated it could be the antioxidant effects of fruits and vegetables or the anti-inflammatory properties, but recognized it may not be directly related to the plant foods at all. When you eat more of one thing, you tend to eat less of another. “For example,” the researchers noted, “the addition of fruit and vegetables resulted in a decreased consumption of meat, which is known to be a pro-oxidant.” Either way, though, there is now hope. The paper concludes: “These findings suggest that a dietary shift to higher-antioxidant food intake may be associated with improvement in lung function, and, in this respect, dietary interventions might be considered in COPD management.”

The tobacco industry viewed these landmark findings a little differently. Instead of adding fruits and vegetables to ones diet to prevent emphysema, wouldn’t it be simpler to just add them to the cigarettes? And indeed, a study was published on the addition of acai berries to cigarettes attempting to show a protective effect against emphysema in smoking mice.

The meat industry quickly followed suit. Blackberries “literally dyed burger patties…distinct purplish color,” experimenters lamented, though infusing lamb carcasses with kiwifruit juice before rigor mortis set in did, evidently, improve tenderness. An experiment to improve the nutritional profile of hot dogs with powdered grape seeds flopped. There were complaints that the grape seed particles were visible in the final product, and if there’s one thing we know about hot dog eaters, it’s that they’re picky about what goes in their food 🙂

PS: If you really were going to infuse lamb carcasses with kiwi fruit juice, do you remember which juice is healthier between green and yellow kiwis? Spark your memory in my 4-min. video Antioxidant Content of 3,139 foods.