I’m just taking a guess. I never met him. But Robert Thornton is probably one of those guys that you meet every so often because, as it turns out, he is a humanitarian. Sharon, his girlfriend, had a stroke on April 4, 2012, and as a result of the stroke, developed, among other things, a subluxed shoulder, common in stroke survivors. She had severe pain that was caused by the misaligned shoulder. First, a little history on subluxation so you can understand what Robert did.

With a shoulder subluxing, the patients sometimes feel a popping sound as the ball joint moves out of the socket then returns. Some patients feel their arms losing feeling. Others get a sense if they raise their shoulders too high, the shoulder will pop out permanently which, of course, it sometimes does. When shoulder subluxes, pain occurs and is positioned primarily in the shoulder joint. The American Academy of Orthopaedic Surgeons (AAOS) says most of shoulder subluxations happen because the shoulder slips forward, starting the patient’s pattern of avoiding motions which give pain to the patient, thus resulting in weakness for those motions the patient can’t–or won’t–do anymore. The AAOS says the shoulder will often sense numbness and tingling, traveling down the arm.

Visual signs are often these:
* Swelling or bruising over the spot where the injury occurred.
* Less rounding of the subluxed shoulder as compared to a healthy shoulder.
* Dimpling below the bony protrusion at the top of the shoulder.

Even if you can’t interpret the visual signs that accompanies subluxation as needing HELP, there is the pain, and that’s where Robert comes into the picture. This excerpt comes from Robert, and I offer it to you, coming right from the man’s heart:

“The ER …man what a scary place…not much compassion there. They deal with death every day and it shows they do what they can, but honestly, how would you like the job of trying to calm down family members of a patient on the brink of death…that’s gotta be hard on your heart and soul. Sharon was in ER for a week. The doctors told us not to expect her to recover and said if she did recover at all, she would have total loss of her left side. Ok, with that news shocking the family, what was I supposed to do? This is my soul mate and I knew if I gave up, she would, too. There was no way I was going to let that happen. So first things first. I taught her to eat so they wouldn’t put a feeding tube in her (tough fight there they kept ordering a tube and I kept telling them to wait. I knew she would eat on her own given the chance). Ok, now we’re off to recovery center.

In-patient rehab….These people do great things and they’re very positive and encouraging (what a refreshing change). The therapy she received helped her leg, her speech, her eating and swallowing, just about everything but her arm and hand…this is what I would like to talk about.

I have been by her side since her stroke every therapy she got. I repeated it in her hospital room and her recovery was amazing, but they couldn’t really do anything for her arm (mainly due to the pain). I asked them about a sling to hold her arm and shoulder joint in place (they said the pain and swelling was from pinched nerves in the shoulder). They said that she just had to work through the pain because there was no sling that really worked for the sublux shoulder.

I watched her therapist hold her arm in place and her pain went away. I started searching for a sling …and sadly they were right. Every sling I found caused more harm than good…and they wouldn’t let me put any on her. (They did try the givemore sling, but it just didn’t work. Every time she bent her arm, her shoulder fell down). Well, I didn’t stop there.

When she got home, she had in-home care and I started making different slings while her therapist kept telling me what was wrong with each sling (I made 10 kinds). Finally, they started liking where I was going with number 11. When I finished it, her therapist loved it. Her pain level dropped to where she no longer takes pain meds. The recovery of her arm jumped 80% in two weeks. Now, all of her doctors and the therapist require her to wear the sling I made. 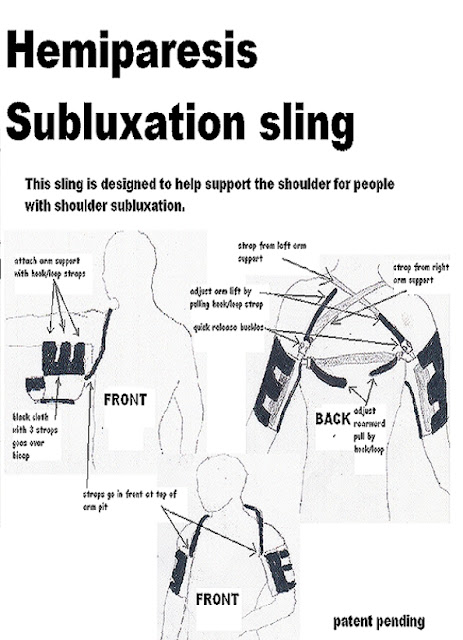 All of her doctors and therapists kept telling me to patent the sling and get it out to the public because there were so many people out there that needed one. So I applied for a patent and put together a workshop to make them.

Over the years, many people have tried to make an arm support for patients with shoulder problems. For a sling to meet the needs of the patient, it has to conform to criteria considerations such as subluxation reduction, easily worn/put on, ability to wear under clothing comfortably, weight distribution, freedom of movement of both upper and lower parts of the arm while keeping the shoulder in place. Our sling meets all these requirements.

My sling starts with a comfortable arm support. I start with an elastic arm band with non-elastic cloth ends with elastic hook and loop fastening system for arm size and comfort . This is placed over the bicep of each arm. Each arm support has a strap permanently mounted on the top front and one strap grommet and one quick-release buckle mounted to the top rear.

The straps are made of semi-elastic material. The top 2 straps start in front of the shoulder and go over the shoulder, crossing each other in the top middle of the back, and the strap from the top front of each arm support connects to the opposite arm support at a point at the top of the arm pit in the back at the buckle so you can adjust the upward pull on the injured shoulder. The third strap runs across the back from arm pit to arm pit with a hook and loop adjustment for lateral support of the shoulder joint.”

If you, or somebody you know, have a subluxed shoulder, go to this site:

Scroll down to the bottom and that’s where you can buy the sling.

Even though I had my stroke 3 1/2 years ago, Robert, who communicates through the therapist, says it might help me restore my arm somewhat. My sling arrived today and I’ll report back to you in three months how it’s working out. As I often say, stay tuned!

*Editor’s note: Joyce has been using the sling for over a month now and says she is pain free!