Overheard at the US Drug Pharmacy Counter: Greed in Action

At our local pharmacy counter, we often hear way too many stories of trauma and anger as people try to negotiate through a for-profit health care system that fights to keep profits growing ever higher by denying medications. We know our struggles are shared because we cannot help but overhear other patients and family members arguing the same issues. And we watch as pharmacists try to fix the messes, offer discount cards to the uninsured, and find ways to assist people who are being denied medications they truly need. 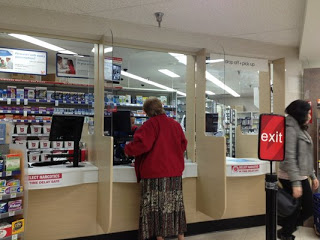 The issue of Americans taking way too many drugs can remain for another day, though it is important to the story too. It is the great push-me-pull-me of the for-profit health system in America. One huge profit-making entity wants sales to rise while another needs usage to drop to increase its profits. Drug companies want sales; insurance companies do not want claims for medications. Providers want patients to receive treatment and procedures; insurance companies want people never to get sick or hurt and need care. Patients are caught in the middle or worse. Patients don’t always know who to trust at all as it seems everyone has his or her finger in the health industry pie of profits.

My husband fought for more than two weeks to get an insurance denial resolved for one of his medications. His Medicare Part D is managed by Humana, and Humana felt that his doctor’s orders should be second-guessed. So, the company approved only half the month’s worth of meds and left my husband to fend for himself or pay in full to take the prescription as ordered. The doctor tried to reason with Humana. No luck. Finally, as the days ticked down to my husband having no pills left to take, his doctor came up with the idea to write a new prescription for one pill each day at double the dosage prescribed earlier. The claim went through.

So, ordering a patient to take two 5 mg tablets each day was denied while ordering one 10 mg tablet daily was approved. And this cost everyone in terms of personnel costs, etc. Mostly, though, it trapped my husband in the middle between his doctor, the insurance company, and the pharmacist who was taking all the heat as the first line of defense or at least the place where the denials are communicated for medications. And while waiting for his now-approved tablet to be approved, my husband heard the pharmacist apologize to another person because the cost for one medication the person was picking up for his sister had risen in costs to over $500 per month.

We need a transformed system under which we can negotiate the best prices for needed medications and care. An improved and expanded Medicare for all for life model would do just that. Providers could be paid fairly under such a system without the need to build in costs for expensive administration like the abomination we now have playing out every minute of every day at pharmacy counters and in provider offices all across America.

Today’s count of the health care dead and broke for profit in the U.S.:

** These figures are calculated based on the Harvard University studies on excess deaths in the U.S. due to lack of insurance coverage or the ability to pay for needed health care, and the Harvard University study that calculated the high percentage of personal bankruptcies attributable to medical crisis and debt in the U.S. 123 people die daily due to lack of coverage or cash to pay for care; 1,978 go bankrupt every day due to medical crisis and debt though the majority had insurance at the time their illness or injury occurred. This statistic is also based on the 1.2 million bankruptcies in the U.S. in 2012, according to the U.S. Bankruptcy Court, and calculating those medically-related bankruptcies from that number.http://www.healthcareforallcolorado.org/endorse_right_to_health_care