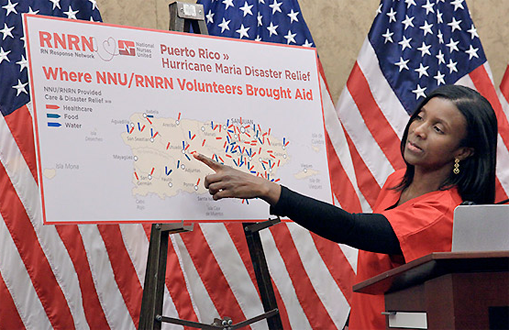 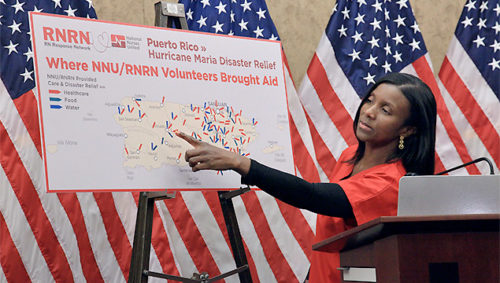 “We were there. It’s no surprise to RNs that the death toll is in the thousands.”

On the one-year anniversary of Hurricane Maria striking Puerto Rico, National Nurses United (NNU), the nation’s largest union of registered nurses, today condemned any doubt about reports that the death toll from the hurricane and its aftermath reaches into the thousands—following President Trump’s recent comment that thousands of people in Puerto Rico “did not die.”

A Harvard study released in May placed the death toll at 4,645 and a recent independent investigation resulted in Puerto Rican officials placing it at 2,975. Both of these figures are in extreme excess of the previous official federal count of 64, as they should be, say nurses.

“After the initial hurricane, there was a needlessly prolonged, man-made disaster, and it is not shocking to nurses who were on the ground in Puerto Rico that the resulting death toll would be in the thousands. As we reach this one-year anniversary, to call what happened there a ‘success’ is horrifying and goes against what our more than 50 volunteer nurses saw with their own eyes,” said NNU Executive Director Bonnie Castillo, RN.

“As patient advocates, nurses want to be very clear that we believe the one-year anniversary of Maria should not be a time for self-congratulation by the U.S. government, but rather a time for self-reflection on what went very, very wrong,” said Castillo.

NNU’s disaster relief project, the RN Response Network (RNRN), initially deployed 50 nurses to Puerto Rico in October, 2017, and the RNs returned sounding the alarm on the deadly lack of food, water and shelter they witnessed. NNU/RNRN released a report to Congress on the deadly conditions, and several RNs testified to Congress in late October and early November, 2017, urging the federal government to take immediate action to prevent further illness and death.

“The RN Response Network has sent volunteer nurses on disaster relief deployments for over a decade, including to areas impacted by hurricanes Katrina, Rita, Sandy and Harvey, and we have never before seen anything like the slow, grossly inadequate response of our federal government in Puerto Rico,” said NNU Vice President and lead nurse for the October Puerto Rico deployment, Cathy Kennedy, RN. “It is no surprise to any of our volunteer nurses, who were able to assess firsthand the precariousness of the situation, that the hurricane-Maria-related death count is in the thousands.”

While the federal government claimed, in the aftermath of Hurricane Maria, that everything was going well in Puerto Rico, nurses described a FEMA presence on the island that was sparse at best, even weeks after the hurricane. People were often standing in line for hours in blistering heat waiting for desperately needed water and food, only to finally see federal disaster officials with paperwork “to collect data,” rather than handing out critical supplies.

During the October 2017 deployment, RNRN volunteer nurses reported Puerto Ricans still living in roofless houses with soaked interiors, where dangerous black mold created respiratory distress and illness — and also reported outbreaks of leptospirosis, a deadly bacterial disease. According to the nurses, many Puerto Ricans were drinking untreated water from streams, while nurses moved from municipality to municipality, desperately trying to do public health education on how to disinfect the water.

RNs Witnessed Deadly Disaster Profiteering
In late January, 2018, the RN Response Network sent a second deployment of nurses to Puerto Rico, in partnership with the International Medical Corps. RNRN volunteers on that deployment still saw closed roads, downed power lines—even months after the storm. Nurses also witnessed negative public health impacts that were now systemic, as corporations used the disaster as an opportunity to capitalize on the privatization of public resources.

“The acute disaster is over, now it’s a manmade disaster,” said volunteer RN Amy Tidd, after returning from the January deployment. “The hurricane has been used as an excuse to take the opportunity to privatize resources and implement austerity policies, just like it did after Katrina in New Orleans.”

Nurses Condemn Transfer of FEMA Funds to ICE
RNRN volunteer nurses have also criticized the administration’s awarding of contracts to ill-equipped companies, out to make a profit, at the expense of human lives.

“Nurses look at a humanitarian crisis, and we get to work putting the general public back into a state of health. Banks, corporations and private contractors see that same disaster as an opportunity to make money,” said Kennedy. “Our volunteer nurses’ weeks of scrambling to find food, water and other supplies for the people of Puerto Rico—were directly connected to the failure of government agencies and contractors who should have been responsible for providing that aid.”

After already witnessing the administration’s ineffective response in Puerto Rico, nurses were also appalled at recent reports that the Department of Homeland Security diverted $10 million from FEMA to Immigration and Customs Enforcement (ICE) to pay for immigrant detention centers.

“We needed FEMA to do better in a major disaster. How can an agency which has already failed, with deadly consequences, do better—with less funding? And the fact that these funds were diverted to detaining children and families fleeing violence and poverty in their home countries is unconscionable. In so many ways, this past year has been a badge of shame on our government,” said Kennedy.

Nurses say they will fight to ensure such a grossly inadequate response never happens again.

“Nurses on the ground saw that people were dying. Our volunteer RNs came back to the U.S. and said again and again, ‘The people of Puerto Rico are dying. Do something!’ Inaction by this administration cost thousands of lives,” said Castillo.

“This is the era of climate related disasters. Storms will only continue to increase in frequency and severity, and nurses know that we must raise our voices loud and hold our elected officials accountable for caring as much as nurses do about the health of everyday people. It’s unacceptable for the richest country on earth to be denying aid to its own citizens.”

For more than 12 years, RNRN volunteer nurses have cared for thousands of patients during disaster relief and humanitarian assistance deployments that include the South Asian tsunami (2004); Hurricanes Katrina and Rita (2005); the Haiti earthquake (2010); Hurricane Sandy (2012); Super Typhoon Haiyan/Yolanda (2013), the Continuing Promise 2010 and 2015 humanitarian missions with the Department of Defense, and Hurricanse Harvey, Irma and Maria (2017). RNRN volunteers have also provided first aid and basic response services to hundreds of community events across the country, as well as rotating teams who assisted the water protectors in Standing Rock in 2016. RNRN is powered by NNU, the largest organization of registered nurses in the U.S.