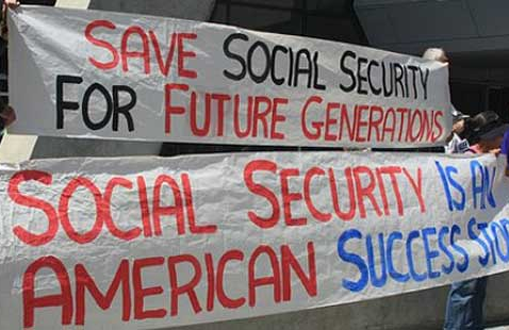 You’ve Earned It: The Truth About Social Security

No one sets the record straight on Social Security, Medicare and Medicaid better than Alex Lawson. Alex is the Executive Director of Social Security Works. Republicans love to refer to these programs as entitlements rather than what they really are — earned benefits. Here’s an excerpt from our recent interview with Alex on the show.

Mitch McConnell, Majority Leader U.S. Senate: “Its very disturbing and its driven by the 3 big entitlement programs that are very popular, Medicare, Social Security and Medicaid. That’s 70% of what we spend every year…the funding of the government is about 30% of what we spend. There’s been a bipartisan reluctance to tackle entitlement changes. Its because of the popularity of the programs. Hopefully at some point here, we’ll get serious about this. We haven’t been yet.”

Mitch McConnell is really the boss in this town. Donald Trump, in many ways works for Mitch McConnell. He accidentally just told the God’s honest truth, which is that Republicans are going to come after our Social Security, our Medicare and Medicaid, no matter what. Its the number 1 thing that they dream about. Usually they lie in a more sophisticated way, and they don’t just come out and say it.

Don’t get me wrong, Mitch McConnell is still a liar here.Social Security can in no way affect the deficit. By law Social Security has no borrowing authority.

The original Monopoly board used to have 2 spaces diagonally across from each other. One was Jail and other was The Poorhouse. What is the Poorhouse? Before 1935, when Social Security was enacted, there was a poorhouse in every single state except New Mexico. The poorhouse was where you went if you exhausted all of your money. It was an American form of a debtor’s prison. It was primarily filled with older women who had outlasted their savings, oftentimes their family support and were too old to work in the economy of the time.  Parents would tell their children, “You better go to school, you better work hard or you’ll end up in the poorhouse.”

Because of the enactment of Social Security the concept of poorhouses disappeared from America. There are no more poorhouses because Social Security took away the situation that led to them existing. The space on the Monopoly board was removed and replaced with Free Parking. That’s how profound a society shift a universal social insurance program like Social Security was able to make.

What we think of as Social Security—old age, disability and life insurance—was created it was a much larger vision. What we consider Social Security now was a small part of it, a cornerstone that FDR laid.

Francis Perkins and the heroes who created the Social Security system always saw it as an ever-expanding system of economic security which included a guaranteed healthcare for everyone in the country. It was next on their list. It was a real big disappointment that they couldn’t get it in 1935. It took 30 more years for the enactment of Medicare to give guaranteed healthcare to people over the age of 65 in this country.  Each generation has been tasked with doing our part, expanding the system of economic security.

It’s simple. The Republicans are going to steal. They put their hands into our pockets, they steal our money. They look at this 2.9 trillion dollars in the  trust fund and they can’t stand that they can’t get their greedy little hands on it.  They are openly gunning for Social Security, Medicare and Medicaid. Republicans voted something like 50 times to decimate Medicare, to slash 800 billion dollars from it, to destroy medicaid completely—the only provider of long-term care for many people in this country.

Listen to the interview here: