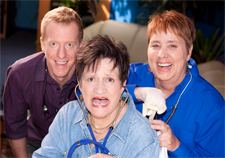 Blogalicious. Patient Stories. Nurse Stories. Tell Us Where it Hurts!

Hello everyone. This week we have a rewind for you but before we chat about that—I do want to put in a plug for our wonderful Nurse Talk blog. Every time I read a new post I am either moved to tears or laughter. Honestly—take a few minutes and check it out.

We’ve mentioned Missy Vaughan and Barbara Taylor Vaughan before. Missy is Barbara’s daughter and she takes great care of Barbara who has Alzheimer’s. Their ongoing blog posts talk candidly about the progression of Barbara’s disease, the ups and downs and everything in between. Oh—and did I mention Missy has M.S.? Together they articulate the “reality” of their lives in Alzheimer’s in the First Person.

And then there’s Brandi Chase. Brandi’s blog called Lymphoblaster is an online chronicle through her bout with Leukemia. In one of Brandi’s entries she writes:

“The litany against fear is an incantation spoken by the Bene Gesserit, a secret sisterhood from the Dune book series,  in order to focus their minds in times of peril.

I must not fear.
Fear is the mind-killer.
Fear is the little-death that brings total obliteration.
I will face my fear.
I will permit it to pass over me and through me.
And when it has gone past I will turn the inner eye to see its path.
Where the fear has gone there will be nothing.
Only I will remain.

I confess, I use it, and it works. Upon waking for the first time after having my central line installed, I was overwhelmed with fear. The pain from the procedure was upon me, and every movement hard, and unfamiliar. I saw two years of this and wondered how I would ever endure it. It was a dark place, and I looked into it, long and deep. It passed over me, and through me. And here I am. Day 23. I remain.”  Read more…

This week we’re featuring a redux of show 449 where we share touching stories like these from our Nurse Talk blog and salute the great writers and contributors that are featured each week. We also have an interview with Deborah Burger on the one-woman play about nursing in America, Tell Us Where it Hurts by Anna Deavere Smith.

Anna is also known as Gloria Akalitus on television’s Nurse Jackie. We share some touching stories recreated by Smith in the play from the caretakers—career RNs—who have also been hit by the failing economy and healthcare costs. Their stories are told with honesty and courage. Share the humanity of what is happening all across the country. 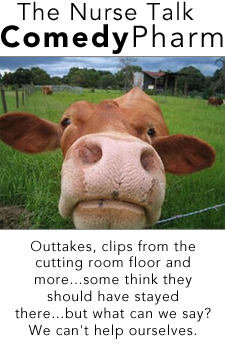 Casey and Shayne also have fun with some—well—rather messy nurses notes, like this one from cardiology: “Patient has chest pains if she lies on her left side for over a year by the time she was admitted to the hospital, her rapid heart had stopped and she was feeling much better.” We also hear from an old friend, Lucille Jones—a rather crazy one at that (no offense Lucille). Lucille’s stories have been memorialized in our Nurse Talk Comedy Pharm…Check them out!

All this and much more. You can listen and laugh every week on Saturdays at 11 am in the Boston area on station WWZN 1510AM or live stream at www.revolutionboston.com and in the San Francisco Bay area on KNEW 960AM or live stream at www.960knew.com. Thursdays at 7pm Eastern on RadioOrNot.com. Check out the iHeartRadio app for free and live custom radio. You can also download and listen to any show anytime here at NurseTalkSite.com or on iTunes. Like us on Facebook, and you can listen there too.