RNs to sponsor soup kitchens, street theater, speak outs on the need for jobs, healthcare, education, housing – and outline plan to pay for it cite Wall Street contributions to legislators while home districts in crisis.

From the Atlantic to the Pacific, 10,000 nurses and community participants will join actions in 21 states Thursday, September 1 demanding action on the economic crisis to heal America. They will call on senators and Congress members in their local district offices Thursday  to pledge to “support a Wall Street transaction tax that will raise sufficient revenue to make Wall Street pay for the devastation it has caused on Main Street.” 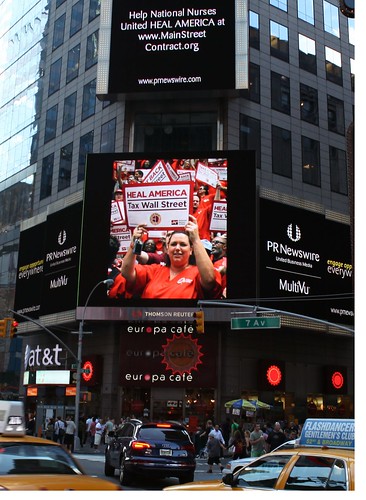 Events, from soup kitchens to help feed the hungry, to community speak outs, to street theater are planned from urban centers like Boston, Chicago, San Francisco, and Orlando, to smaller towns, such as Corpus Christi, Texas, Marquette, Mich., and Dayton, Ohio. National Nurses United, the largest U.S. union of nurses, is sponsoring the actions. Creative events will include a town crier in Boston reading a litany of Wall Street transgressions against America, 8-foot tall puppets, and flash mobs.

Nurses will visit home offices of Republicans and Democrats, with a common message: American families are hurting, and they need jobs, healthcare, housing, quality education, nutrition, and a secure retirement.

In addition, the RNs will release data where available contrasting contributions the legislators have received from Wall Street with plummeting economic conditions in their districts that has left substantial numbers of their constituents in crisis.

Rep. Paul Ryan, for example, a Wisconsin Republican, has accepted $2,417,672 in campaign contributions from Wall Street financial institutions over the past 12 years as a champion for their interests. But the payoff has been small for his district, where 69,241 people are uninsured, 22,884 are dependent on food stamps, and 20,394 children and 7,939 seniors live in poverty.

Similarly, Sen. Michael Bennett of Colorado, a Democrat, has collected $2,409,806 campaign contributions from Wall Street interests while his state languishes in the top 10 for foreclosures, has 184,689 children in poverty, 116,941 people dependent on food stamps, and 13,390 homeless.

NNU will also be calling for the establishment of Main Street commissions to push real solutions for Main Street communities, such as the Wall Street financial tax, as a contrast to what NNU Executive Director RoseAnn DeMoro calls “the Wall Street ‘super committee’ set up in the recent debt ceiling deal whose main goal seems to be more cuts in programs that help people to funnel more resources to Wall Street and foreign banks and investors.”

“America’s nurses every day see broad declines in health and living standards that are a direct result of patients and families struggling with lack of jobs, unpayable medical bills, hunger and homelessness. We know where to find the resources to bring them hope and real solutions,” said NNU Co-president Karen Higgins, RN.

A tax on Wall Street trading of stocks, derivatives, currencies, credit default swaps, and futures – which many other nations have now adopted – could raise hundreds of billions of dollars to pay for programs that “are desperately needed to reduce the pain and suffering felt by so many who feel abandoned across this nation,” says NNU Co-President Deborah Burger, RN.

“It’s time for Wall Street financiers, who created this crisis and continue to hold much of the nation’s wealth, to start contributing to rebuild this country, and for the American people to reclaim our future,” says DeMoro.

The $2.4 trillion in government bailouts to financial and other institutions already spent, noted DeMoro, alone would have funded 63 million jobs at the national median level of about $39,000 a year. “Instead, we have over 25 million people who are unemployed or underemployed, and in the past decade U.S.-based corporations added 2.4 million jobs in foreign countries while divesting in America, cutting 2.9 million jobs in the U.S.”

“We need to reallocate the money back to our communities, and our actions on September 1 are going to raise the demand to a new level to heal our nation,” said NNU Co-president Jean Ross, RN.View the List of Sept. 1 Nationwide Actions and Join Us

Learn More About the Main Street Contract for America