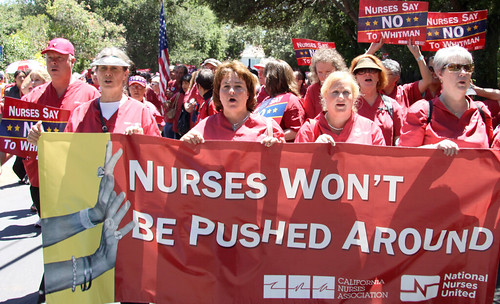 By Nardine SaadAssociated PressJuly 15, 2010Atherton, Calif. (AP)–Hundreds of unionized nurses wearing scrubs held a raucous rally Thursday outside the Silicon Valley home of GOP gubernatorial candidate Meg Whitman to protest her proposals for the state, which they say will hurt working people.Dozens of police officers descended on the leafy streets surrounding Whitman’s two-story colonial home in Atherton. An estimated 1,100 protesters chanted “We’re going to beat back the Whitman attack” as an airplane paid for by the nurses union circled overhead, trailing a banner that read, “Nurses say no to Whitman.”The colorful display was part of an escalating feud between Whitman and California Nurses Association, the 85,000-member union that has trailed the former eBay CEO at her campaign events with an actress dressed as “Queen Meg.” The union says Whitman, a billionaire who has never before run for public office, is trying to buy the governor’s race by spending tens of millions of dollars from her personal fortune.The “Queen Meg” character made an appearance Thursday, standing in front of Whitman’s white picket fence surrounded by two tuxedo-wearing bodyguards with sashes identifying them as “Goldman” and “Sachs.” It was a reference to Whitman’s time serving on the Goldman board, during which she was paid $475,000, and criticism that she benefited from a questionable practice in which executives whose companies did business with Goldman were given preferential access to stocks.”Queen Meg” acted out a scene in which she pushed a woman dressed as California to the ground, saying she would eliminate public employees and give tax breaks to the wealthy. It was a play on a recent report that Whitman agreed to a confidential settlement while she was chief executive of eBay after she instigated an altercation with an employee.Whitman also has proposed eliminated 40,000 state government jobs.Jen Lendl, a 38-year-old nurse at Kaiser-Oakland, said Whitman’s proposals would roll back benefits and pensions for public employees, who she described as hardworking.”She’s threatening the rights of nurses, patients, also attacking the teachers and firefighters. These are good people,” she said.Whitman was not home Thursday. Instead, she had a campaign event at a flashlight-manufacturing company in the inland Southern California city of Ontario.Afterward, she told reporters that the rally outside her home was a distraction and that she would remain focused on one of her top priorities — developing ways to create private-sector jobs in California.”Everywhere I travel, and you could see it here today, people are very worried about jobs,” she said. “The thing on people’s minds is who has the best chance of fixing the job climate in California?”Her campaign spokeswoman, Sarah Pompei, said Whitman is making an effort to describe her positions directly to nurses. Whitman has mailed letters and fliers to nurses’ homes, urging them not to believe their Democratically aligned union leaders. She says she supports the nurses’ signature issue, a state law that requires one nurse for every five patients, and does not believe all nurses support the union’s antics.Jeanmarie Wong, a nurse at the University of California, Irvine Medical Center, is among those who has been targeted by Whitman — both as a nurse who received the fliers and a registered Republican. But Wong said she cannot support Whitman in November unless she is persuaded she would protect patient safety.”I didn’t necessarily want to vote for her unless she comes out to say that she is in line with the policies that are best for the patient safety and best for nurses in California,” Wong said. “We don’t want to go back, when (nurses) couldn’t get paid, they couldn’t get anybody to listen to them about what was best for health care.”Union leaders say Whitman’s proposal to eliminate thousands of state government positions would leave regulatory agencies that oversee health care understaffed and put patients at risk of having too few nurses. They also say Whitman’s proposed regulatory rollbacks threaten their meal and rest breaks.The nurses association and other unions support Whitman’s Democratic opponent, Attorney General Jerry Brown.Nurses attending Thursday’s protest said they planned to send the mailers back to the Whitman campaign with letters explaining why they do not support her.Rose Ann DeMoro, executive director of the nurses union, said Gov. Arnold Schwarzenegger said he backed nurses — until he was elected and filed a lawsuit against the nurse-patient ratio law. She called Whitman “Schwarzenegger on estrogen.”