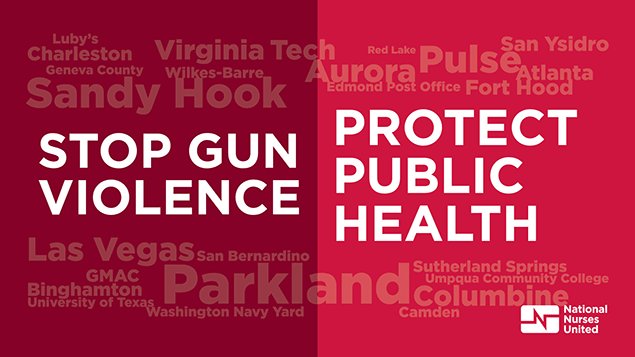 ‘When Will the Excuses Stop? Time for Action’ 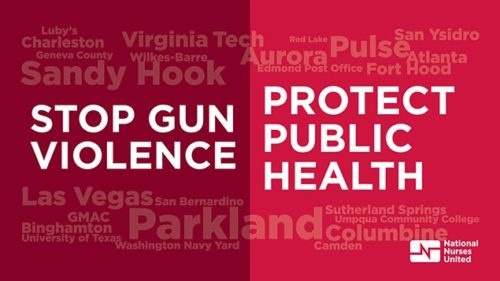 In response to yet the latest school shooting nightmare at a high school near Houston, National Nurses United (NNU) today called for lawmakers in Congress and every state legislature to finally act to protect public safety.

“Expressions of ‘thoughts and prayers’ will not stop this epidemic of mass murder that puts all of our families, all of our communities, in danger, every day. When will the excuses for inaction stop?” said NNU Co-President Jean Ross, RN.

“Whether it is shootings with military grade weapons in schools, churches, music festivals or other public settings, neighborhood gun violence, or, too often, police shootings of unarmed civilians, we can no longer be immune to what has become an unconscionable public health crisis and moral imperative,” Ross said.

NNU has long stressed that personal safety is a health issue, and that “as nurses we are dedicated to healing and alleviating human suffering that begins with prevention,” said Ross. “Confronting gun violence must be part of that prevention.”

“In addition to loss of life and injury, there are long term consequences
that erode the mental and physical health of family members for years,” said Ross.

Ross said there are many “common sense steps that can begin to show that, as a nation, we are finally ready to act.” They include:

Mental health services have long been on the chopping block federally and in state governments for a number of years, $5 billion cut in state programs from 2009-2012, for example. Mental health programs are both preventive and therapeutic for those dealing with the aftermath of gun violence. An improved and expanded Medicare for all, with full funding of mental health services, is the most comprehensive approach to assuring proper funding.

Between 2011 and 2016 at least 58 hospital workers died as a result of violence in their workplaces, of which gun violence is a part.  NNU is sponsoring federal legislation, HR 5223, to mandate the federal Occupational Safety and Health Administration (OSHA) develop a national standard on workplace violence prevention to require all health facilities develop and implement comprehensive facility and unit-specific workplace violence prevention plans, based on a California model now in place. NNU proposes a similar standard for all workplaces, including schools and other settings where shootings have occurred.

In the decade the U.S. banned assault weapons, 1994 to 2013, the number of gun massacres fell by 37 percent compared to the prior decade. After the ban was allowed to lapse, mass shootings leaped by 183 percent.

Current federal law only applies to federally licensed firearm dealers, not to the internet or gun shows. A 2015 survey found 42 percent of gun owners acquired their most recent firearm without a background check.

Suicide by firearm is the third leading cause of death for children ages 10-14. In a 2010 comparison with other highly developed nations with large populations, the U.S. gun homicide rate for people aged 15 to 24 age group was 49 percent higher.

Comprehensive policing reforms, including improved training to emphasize de-escalation of conflict and limits on the use of deadly force, and improved racial bias training and hiring targets to increase diversity.

De-escalating conflict is critical, limiting use of deadly force to situations where there is imminent life threat to an officer or another person should be the priority. Other steps include ending routine harassment like “stop and frisk” that leads to a higher likelihood of conflict, improved human relations training, and enhanced community oversight and civilian review of police agencies and policies.