Wet or a Warm Blanket? 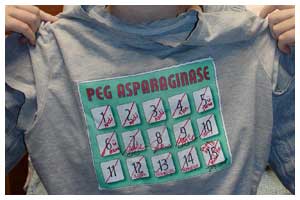 Sometime before midnight and dawn on Friday I woke with a moment of clarity. Deep inside I’ve always known that my port-o-cath was in the wrong place. It had been installed during the lowest trough of my treatment, when I was malnourished and depressed. My skin was simply not healthy enough to stretch to accommodate this 1/2″ x 1″ device. When you know something is wrong, there is just no denying it. I wasn’t looking forward to having the device removed and something else installed, but realized I have a year and three months of weekly chemotherapy before me. The device must be as healthy and stable as possible.

Essentially, because the skin wasn’t healthy enough to stretch part of the suture scarred open, leaving a 1/4″ hole. A hole is a very dangerous potential for infection.

The latest status? Port-o-cath removed. PICC installed. Here’s the lowdown if you want it. PICC will remain in left arm until cycles 9 and 10 are complete, and PEG Asparaginase has completely left my system and I can go off of blood thinners. This is roughly 6 weeks from now. At that time, a new Port-o-cath will be installed, left side, but lower.

Now as for Friday, and all the procedures, I have to say it was one of the best, most blissful days of my life. See I asked for warm, not wet blankets. Hospitals are famous for their abundant supply of warm blankets.

I had the strangest offer when I arrived at Angiography. The nurse asked if I preferred to be sedated or conscious for the procedures. To be sedated would have added another 2 hours to the event, and I would have missed all the action. I’ve been sedated once, when the port-o-cath was installed. I liked missing that. I really had to think about this choice, after all it is nice to be oblivious when potentially painful things are happening to your body. But, I really love the team in Angiography, I like to hang out with them, they make me laugh. The surgeon’s are skilled, and I like to appreciate their work.

I decided to go through it consciously. It’s more my style, after all I’m trying to become as conscious as possible, right? What an opportunity to practice. And not in a masochistic way! The numbing is really incredible, no pain, just a little pressure, thankfully, no IV!

First they cover me with as many warm blankets as I like, next they tape me under a big blue tent so I can’t see what is happening, then they numb me up with lidocaine and the adventure begins.

We had a great time while pulling out the port-o-cath. We all shared stories about some of our travels, especially into the wild. One person actually witnessed orcas catching and eating sea lions off of the ice! U2 was requested—one of the nurses had created a play list of the current tour. I asked, “Won’t you be bored at the concert having heard all these songs in order already?” He explained, “My wife and I memorize the play list, then sing along with the musicians. It’s a spiritual experience.” I really got where he was coming from, and my heart filled with the joy of the two of them, sharing their voices with each other, and everyone else there.

Suddenly the port was out, whiz, bang, bam, and then it was time for closing the wound. Dr. J had to trim off or shave off the edges of the wound to create a ungranulated surface that would encourage the sides to adhere to each other. As he sewed he told us the story of how play lists on the radio came to be. Apparently, some desperate radio executives were having a power lunch at a local diner with a jukebox. All day long as the executives discussed their predicament, people kept nickeling the same song over and over, right down to the waitress, who selected that song at the end of her shift. “Aha!” said the executives, “People don’t want variety and change! They want the same thing again and again.” So they (and shortly after every one else) changed their format to 25 songs and that is one of the many reasons the world is stuck in a rut.

Once I was sewn, Dr. J looked over his work and said, “I don’t mean to brag, but that looks pretty damn good.” and then strutted off into the other room to get a mirror for me to appreciate his handiwork. You know, it did look pretty damn good. Two days later, it feels great too!

With the port-o-cath removed they shuttled U2 and me, past Randin waiting so patiently, (“Hi honey! One down!” I said), into the room with the X-Ray machine for the PICC line.

I won’t lie to you. The only thing pleasant about having a PICC (peripherally inserted central catheter) installed is the warm blankets. And, once a PICC is installed it isn’t very comfortable. One of the fun things about the X-Ray room however is they often turn on and off the lights so they can see the images. You kind of feel like you are camping with a flashlight. And one time one of the nurses had to crawl under the blue tent to release the tourniquet so it was like camping with another person.

By 3PM and after 5 hours of waiting in Room 5 (AKA the Icebox) I was home, filled with Daptomycyn (systemic antibiotic for all my new holes and burns) and Methotrexate. No matter the drama, the perceived obstacle, there is no stopping this protocol when the chemo is due, you get it.

Dawn and Lisa Marie came over for dinner. I’m not ashamed to admit we were mung bean munchers. The food was great. Lisa Marie and I talked at length about the day’s experiences. She introduced me to a concept called contrast. When the distance between two extremes occurs, it creates an opportunity for seeing and experiencing on a much more profound and clear level. As she said this, she opened her hands to represent the distance and immediately I recognized the midline. In my spiritual tradition, it is the space in between the subject and object where the bliss of consciousness resides.

I’ll tell you, I was in this space all day long. Yes, I was dealing with disappointing, sometimes even painful events but I had accepted their necessity as a blessing. I wound up asking for, and receiving nothing but warm blankets all day.