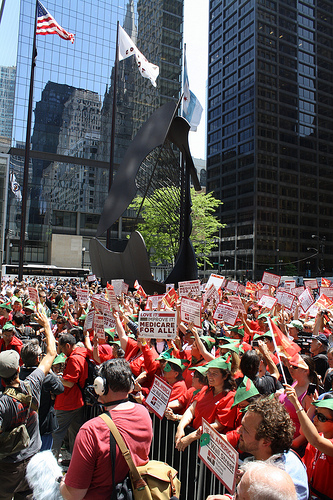 Big news out of National Nurses United’s Staff Nurse Assembly in Chicago last weekend was the rally in Daly Plaza supporting a half percent tax on stock trades.  Nurses have aligned with the worldwide Robin Hood Tax Campaign say:

We believe it’s time to rewrite the contract between banks and society.

We are economists – Nobel Prize winners Joseph Stiglitz and Paul Krugman, Earth Institute Director Jeffrey Sachs and 1,000 other economists from across the world.

We are world leaders – President Hollande of France, Chancellor Merkel of Germany, among others.

We are part of a global movement representing over 220 million people in 25 countries.

We are a force to be reckoned with, and we’re demanding justice.

Are you?  Learn more at robinhoodtax.org.

A May 15, 2012 blog post on the site, Nurses Push Tax on Trades to Help Sick,  shared by Sarah Anderson Director the Global Economy Project at the Institute for Policy Studies in Washington, D.C first appearing in the Chicago Sun Times, quotes NNU President RoseAnn DeMoro, “RoseAnn DeMoro, executive director of National Nurses United, says there’s a simple explanation: “The big banks, investment firms and other financial institutions, which ruined the economy with trillion-dollar trades on people’s homes and pensions and similar reckless gambling, should pay for the recovery.”

Nurses have been on the front lines of the crisis, seeing firsthand the health impacts of skyrocketing poverty and record high rates of uninsured Americans.

Their specific tax proposal: a small fee on each trade of stocks, derivatives and other financial instruments. Even at a rate of 0.5 percent or less, such taxes could generate massive revenues to pay for things ordinary people in Chicago and elsewhere urgently need, such as affordable health care and decent schools.”