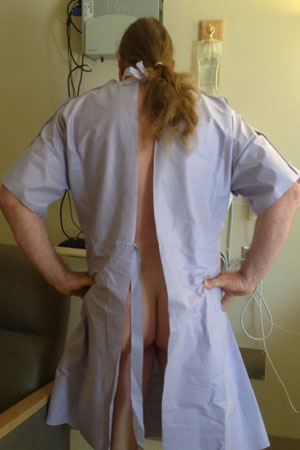 The Hospital Gown: Misguided and Malfunctioned

Country Music icon Trace Adkins sang “Honky Tonk Badonkadonk” at the Grand Ole Opry when I was in Nashville about a decade ago. The music was hot, but the lyrics left me wondering about Trace:

So when crazy-as-a-loon, slap-your-grandma, meant-to-do-it Trace tweeted a picture of himself wearing a hospital gown when getting his kidney stones blasted (tweets are generated by Twitter for all of you who know how to get on Facebook and not much else), the hospital gown had its back open, allowing you to see Trace’s bootie. His comment in the tweet was, “@ Vanderbilt having kidneys stones busted. No big deal.”

The big question is, why would he do that, being an icon and all. And why would anyone want to see Trace Adkins’ flat, skinny, sorry ass? I saw it and it wasn’t pretty. Not even close. (You can see it, too, if you want, at this link: tasteofcountry.com/trace-adkins-naked-butt-surgery-twitter/). Some history follows on the hospital gown, and then I’ll tell you my experience with the gown. Unlike Trace, I didn’t mean to show “it.”

The hospital gown has been in use since the beginning of the 20th century. There’s been some adjustments–a snap or two, cloth straps vs plastic ties–but mostly, they’re still the same. I don’t get it. The gown is the premier piece of clothing that separates the patients from the visitors and staff. So why no improvements?

“It is amazing. We have created a product nobody likes,” says Blanton Godfrey, dean of the College of Textiles of North Carolina State University and an advocate for change.

That’s right. Almost nobody likes the hospital gowns. But the college went ahead and established focus groups to hone in on the gowns. With hospital gowns now holding over a whopping $75 million in the marketplace, somebody had to do something. And they did. The college got a grant, a quarter of a million to be exact, to improve the design, production, and marketing of the gown. A muckety-muck, the program officer in charge, dubbed the effort “Down With The Gown,” that might be good for Trace Adkins’ mindset because he only wore half of it. Personally, I think they should have called it what it was: “That Dumb-Ass Gown Has to Go.” .

There were efforts to improve the open-air gown. Nicole Miller, the posh designer, came up with new designs, sporting stethoscopes, syringes and other medical-related stuff, for Hackensack University Medical Center (HUMC) in Hackensack, N.J., but in the ten years she has been re-inventing the hospital gown, HUMC is her only client. Maybe it’s because the gowns are double the price of the regular gowns.

At around the same time Nicole was performing her magic, trying to make something ugly into something not, Maine Medical Center in Portland came up with the sarong, an overdose of fabric for the Muslims patients, because they were missing appointments rather than wear the immodest hospital gowns. And designer Cynthia Rowley created gowns that were longer, had a mock turtleneck, and three-quarter-length snapped sleeves for women. She also designed a “gown” for men with expandable pants, a short sleeve shirt, and a matching robe. All improvements, for sure.

On the other hand, Michael Georgulis, the vice president of a nonprofit group which aligns 2100 American hospitals, thinks the old hospital gown has suffered an injustice. He says that there are two reasons the hospital gown should stay in its original form: the gowns are inexpensive and it works well in emergencies. Gregulis must have never suffered the indignity of the gowns. If he did have to wear the hospital gown, he might have sung a different tune. Seriously, how could he not?

So what happened to me? I’ll tell you because I want you to see how a stroke patient figured out what to do with the ass-inine gown. I broke my shoulder in the winter when I attempted to sit on a chair without arms. It was just a seat, but as I sat, I fell off because I lost my balance. I hit my head and hip, too, and passed out for a minute or two. I went to the hospital and, of course, the nurse put me in a gown, the unfancy, usual kind with a closed front and an open-air back. There were ties in the back, but as I walked to the bathroom in the busy emergency room, with one hand on the cane and the other hand not functioning, I had to make a run for it. Unlike Trace Adkins, I didn’t want anybody to see my behind as it flapped along, proverbially speaking, like two huge melons in synch.

I sat on the toilet and tried to imagine a better way. And then it hit me because, obviously, desperation (and necessity) is the mother of invention. I stood up and opened the door slightly to get a passing nurse’s attention. I said I wanted another hospital gown because mine tore at the straps. That was a lie, but with new hospital gown, I put it on backwards, the one underneath with the ties in the back, and the new one with the ties the front. My ass, at last, was secure.

I left the bathroom, knowing in full confidence, that my behind was safely tucked away beneath the new gown. I hadn’t come up with an idea that good since I discovered cut and paste back in the early 90s. When the doctor came in, he asked me why I was wearing two gowns.

“Because I don’t want my ass sticking out,” I replied. Then he saw the cane, chuckled, and put “2 and 2” together. Two gowns indeed.

The doctor ordered an ultrasound and, as it turned out, I didn’t injure my partially-altered brain and I didn’t break my hip, but my shoulder was broken, and I still have swelling today, six months later, to prove it. But my bootie is right where it is supposed to be, unlike Trace’s, safely hidden away and not disappointing anyone.