Nurses led the fight at last week’s G20 Summit protests in Cannes, France at several events and at simultaneous rallies in Washington, D.C., San Francisco, and Los Angeles, garnering national and international press coverage. Did you see this? Three-minute video: Nurses from around the globe at the G20 Summit show how to heal the world’s economy with a financial transaction tax.

“Protests matter. Pressure matters,” concluded John Nichols of The Nation, writing about the shifting sands in the White House, and noting NNU’s role and the erupting support for an FTT that now includes billionaire Bill Gates and the Pope. “The nurses aren’t just making noise. It looks like they’re changing the debate, altering the policies of the most powerful players in Washington–and perhaps the world.”

On with the show. When the cats are away…the best of Nurse Talk must play!

Coming up this week Casey and Dan visit with Texas RN Monica Sanchez about the union vote that recently occurred in Texas and made history as the first of its kind. Texas RNs in five cities voted to join National Nurses United. They will now join thousands of other bedside nurses across the country who are fighting for patient rights and better conditions for RNs.

Also with us is Janet Izzo. Janet is a Minneapolis RN who has written a book called Hotel Hennepin (named after the Hennepin County, Minnesota Hospital where Janet works). In the newly released book Janet chronicles her career working in a large county hospital as a staff and charge nurse on the obstetrics unit. The stories are poignant, sad, hysterically funny and all amazingly true!

And, we have a winner in our “Dan’s Thing” contest where we challenged listeners to follow the clues and guess, “What’s Dan’s Thing?”  It’s fun and funny.

Get your tickets to Menopause the Musical in Concert. Menopause is on tour and coming to a city near you. Nurses and their friends receive 10% off with code “SG” (or “SUPER” for Santa Cruz shows). 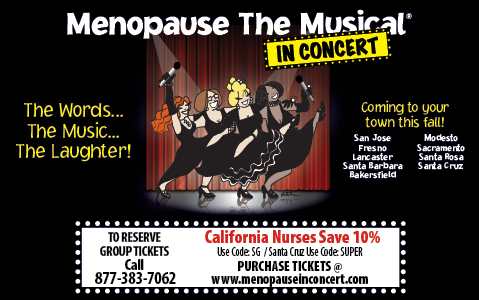 NURSE TALK IS GROWING…GROW WITH US. ADVERTISE to our active and engaged audience. Email to reserve your spot on the air or online: pattie@nursetalksite.com.

You can listen in the Boston area on station WWZN 1510AM every Saturday at 11 am EST or live stream at www.revolutionboston.com and in the San Francisco Bay area Sundays at 2PM PST on Green 960AM or live stream at www.green960.com. You can also download and listen to any show anytime here at NurseTalkSite.com or on iTunes. Like us on Facebook, and you can listen there too.

Until next time remember “laughter is the best medicine!