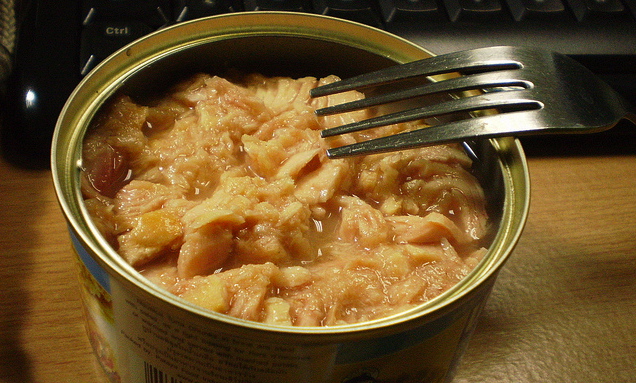 “55% of all tuna examined was above the U.S. Environmental Protection Agency’s safety level for human consumption.”

And the problem appears to be getting worse. Previous studies on canned tuna, in 1993 and 2004, showed concerning levels of mercury contamination, but not as bad as it is now. See my profile of the paper in my 2-min. video Which brand of tuna has the most mercury?

Given the average level of mercury pollution found in canned tuna, researchers suggest that your average 9 year old would exceed the EPA limit even if they only ate a can of tuna every 6 weeks! They conclude: “These results indicate that stricter regulation of the canned tuna industry is necessary to ensure the safety of sensitive populations such as pregnant women, infants, and children.”

Some question whether the federal safety limits are even sufficiently protective. A recent review from researchers at Harvard and elsewhere on the adverse effects of mercury in fish proposed that the exposure limits set in the United States should be cut in half. Already, current regulations in the United States allow up to 10 times as much mercury in fish as the EPA limit allows, and so our fish is allowed to have 20 times more mercury than may be considered safe.

Because the EPA safety limit on mercury in fish may not sufficiently protect pregnant women in the United States, a recommendation has been put forth that fish-eating women may want to get tested for mercury before considering getting pregnant. It’s a simple test. Since mercury basically contaminates our whole body, all they need is a hair sample. See more details in my 2-min. video Hair Testing for Mercury Before Consider Pregnancy.

Studies on children of the neurobehavioral toxicity of mercury suggest that no level of mercury exposure can truly be considered safe, but pressure from the fish industry may be preventing safety limits from dropping further. In my video Nerves of Mercury I profile a famous study published in the Journal of Pediatrics showing brain damage in adolescents at below the mercury limits placed on fish in this country. As one former EPA toxicologist told the Wall Street Journal, “They really consider the fish industry to be their clients, rather than the U.S. public.”

Mercury is not just a problem for children. Mercury and other toxic pollutants in fish is thought to be why the consumption of dark fish (such as salmon, swordfish, bluefish, mackerel, and sardines) may increase one’s risk of atrial fibrillation, an irregularity of heart beat rhythm associated with stroke, dementia, heart failure, and a shortened lifespan. See my 2-min. video Red Fish, White Fish; Dark Fish, Atrial Fibrillation. Also check out Fish Fog, which discusses the link between fish consumption and neurobehavioral abnormalities in adults. For more information on industrial pollutants in fish, see Xenoestrogens & Sperm Counts and Fish Intake Biomarker.

There are also natural toxins that can bioaccumulate up the aquatic food chain. See my 2-min. video Amnesic Seafood Poisoning about a rare toxin called domoic acid. It can turn up in tuna and other seafood and can cause anterograde amnesia, the loss of short-term memory popularized in the movie Memento. Even drugs can build up in fish. In my 1-min. video A Fine Kettle of Fluoxetine, I follow up on my earlier video Prozac Residues in Fish about the occurrence of pharmaceuticals and personal care products in fish fillets.

For more on canned tuna specifically, see Carcinogenic Putrescine, The Effect of Canned Tuna on Future Wages, Amalgam Fillings vs. Canned Tuna, and Mercury in Vaccinations vs. Tuna.

Fish aren’t the only source of toxic heavy metals, though. Mercury has been found in both high fructose corn syrup-containing products (see Mercury in Corn Syrup?) and Ayurvedic dietary supplements (Get the Lead Out).