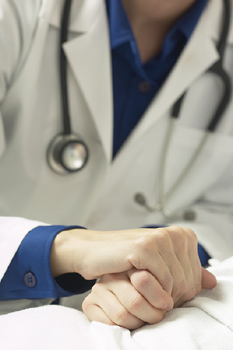 Before I was a nurse, I had occasion to be a young patient.

I had a brief but painful procedure to undergo. My nurse was named Anne. She told me that if it hurt, I should just go ahead and scream.

It was nighttime, and all the other patients on the floor were asleep. It must have been the incipient psych nurse coming out in me; I was determined that those other patients not be woken up.

“I’m not going to scream,” I said gamely.

“Well, then, here’s my hand, squeeze it really tight if you need to,” Anne said, resting her right hand in mine.

I needed to, all right. I squeezed really hard, and I screamed anyway, waking all the other patients and probably a couple of the dead down in morgue, not to mention shattering a few glass pipettes down in the lab. I also suspect that I broke a couple of small, unnamed bones in Anne’s hand; as soon as it was all over, I could see that it was already turning purple.

I remembered Anne when I was a student doing a rotation through a same-day surgery unit. They were preparing to do an I&D on a man with a badly suppurating scrotal abscess. It was a dead heat as to what was absolutely the worst thing about the situation: the sight, the smell, or the man’s embarrassment at having a skinny little nursing student in the room. I remembered Anne, gave the man my hand, and told him to squeeze it if it hurt.

It had to have hurt him, bad. He squeezed my hand, hard. Really hard. Hard enough to keep himself from screaming. The fact that he was able to endure the pain in silence seemed to give the man some of his dignity back. The fact that I hadn’t flinched in spite of a badly bruised hand somehow righted my own undignified scream of years before.

Lots of research has been done about the occupational hazards of nursing. Back injuries in our Orthopedic colleagues. Workplace violence experienced by our ED sisters and brothers. Teratogen exposure faced by our Oncology nurses. The effects of shiftwork on the graveyard crew and the Baylor cohort.

I don’t think anybody’s ever put any research effort into our hands, though. Since the ‘squeeze my hand’ thing is so intuitive and universal in nursing, I think it bears investigating. Maybe we could all volunteer our hands for X-ray, and see how many of us are carrying around old fractures of our phalanges, carpals, metacarpals, and sesamoids. I have a feeling that many of us would turn up positive for Big Squeeze Syndrome.