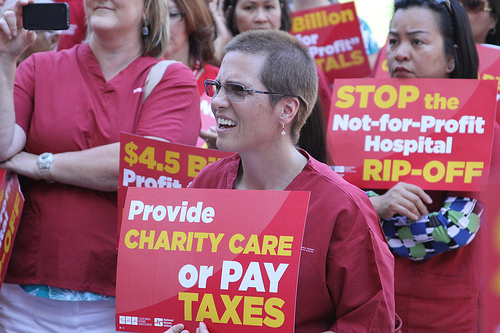 Many private nonprofit California hospitals, especially those that are part of big corporate chains like Sutter and Kaiser Permanente appear to be exploiting their tax-exempt status by accumulating huge profits, and handing top execs massive pay packages while providing scant charity care in return.

That’s the finding of a new report by the Institute for Health and Socio-Economic Policy, research arm of the California Nurses Association/National Nurses United, that was presented Wednesday in a Sacramento legislative hearing.

The nurses urged legislators to pass legislation to rein in the abuses by requiring minimum levels of charity care that all hospitals must provide to keep their tax exempt status, as well as more rigorous reporting requirements with real penalties attached for violators.

The findings were presented to a special California Senate Select Committee on Charity Care and Nonprofit Hospitals chaired by State Sen. Ellen Corbett.

In California, non-profit hospitals harvested more than $1.8 billion in government subsidies and benefits from their tax exempt status beyond what they provided in charity care in 2010.

The impact is especially severe on struggling cities and counties. They lose more than $1 billion as a result of the tax exemption of nonprofit hospitals, and what local governments pay directly to hospitals in their communities to provide hospital care for the poor.

Several of the state’s biggest and best known hospitals, Cedars Sinai Medical Center, Stanford University Hospital, and Sutter Health’s California Pacific Medical Center and Alta Bates Medical Center, are the biggest abusers in racking up government subsidies in the form of favorable tax benefits beyond what they give back in charity care.

Among the big non-profit chains, which sometimes act more like JP Morgan or Goldman Sachs than they do centers for providing therapeutic care and healing, Sutter and Kaiser are particularly egregious. The two corporate giants make up over 45 percent of the total tax benefits for all California non-profits, and were near the bottom in percentage of charity care they provide relative to their profits.

Further, the report noted 100 top executives at California nonprofit hospitals who take home more than $1 million in pay packages, nearly half of them at Sutter and Kaiser alone.

The IHSP/CNA report follows the release last week of another report on non-profit hospitals by the California State Auditor. Speaking at the hearing, Grant Parks, Principal Auditor of the Auditor’s Office, noted that “state law does not require specific amounts of community benefit to justify (hospital’s) tax exempt status.” State law, he said, “is fairly permissive on what can be counted as community benefit…It’s like the Wild West of what is required.”

Ellen Shaffer, director of the EQUAL Health Network, a project of the Center for Policy Analysis, noted that, unlike California, 11 states can suspend tax exempt status, Texas and Alabama require specific thresholds for how much charity care a non-profit must provide, and Indiana, Maryland, and Texas levy civil penalties for late filings of reports – all of which are well beyond what California requires.

Lighty emphasized the disparity in what the non-profit hospitals provide, and cited an example from the Auditor’s report. The Auditor cited Sutter’s California Pacific Medical Center and found that the level of charity care as a percentage of profits was 17 percent for CPMC’s St. Luke’s Hospital, which serves a working class and low income community, compared to just 4 percent for CPMC other facilities that cater to wealthier neighborhoods.

Same city, San Francisco, same hospital system, great disparity, Lighty noted. If a level playing field is not established, those hospitals serving lower income communities and doing more to meet their obligation will be the ones most in danger of closing, just as Sutter/CPMC has been trying to do with St. Luke’s