Accolades for the National Nurses United, and Director RoseAnn DeMoro

Thank you Nurse Talk listeners so much for making your voices heard and voting!

As many of you know, each year, Modern Healthcare conducts a poll requesting votes for the most powerful leaders in our healthcare economy. On behalf of the NNU, I’m honored to have made the list for the 12th consecutive year. The reason that I am even in the running is because I represent the most powerful (unsung) players in healthcare and you had the power of the vote to make this happen.

Others who made the list are the high rollers in the healthcare industry who would like to deny the role of the registered nurse as essential.

But the vote, which is about the power of RNs and NNU, seems very out of place there.  It is because you are the only group about the patients.  I would say the overwhelming majority of this list is either Wall Street-controlled, about maximizing profit or positioning to run for office. Nurses are none of these.

The power of you and your profession, when realized is enormous.  And that goes for the staff who work with you.  So yes, the award names me and gives me a soap box to talk about nurses and the corruption in the healthcare industry but more importantly it should signal to you that when motivated, you are unstoppable!

We have to pull it all together and we have to help other people pull it together before it is too late.  Nurses salaries are being targeted, I am always being targeted, but these targets will come with much greater force.  We have a moment in history.  We have to maximize it and protect the health of this country and the role of the RNs. 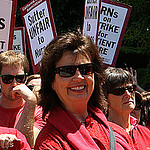 Here’s my podcast interview with Modern Healthcare, and here’s a link to our press release.

Thanks again for making a statement by taking the time to vote on this.